2007. YEAR TWO. PROVERBS.
For the second year of the Fest, criteria grew from a theme that consisted of only one word or simple idea, to a complete thought in the form of an international proverb.  32 films were turned in on time, more than doubling the amount of teams from the first year. 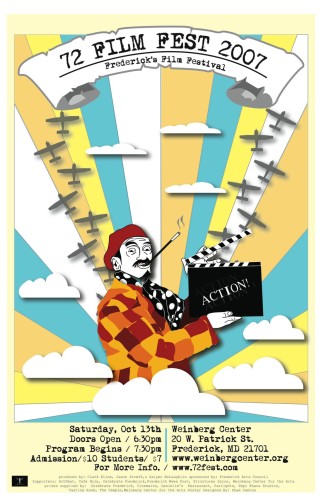 Grand Prize, Best Acting, Best Cinematography: Big Wave Media, Mike Yamrus proverb: A bird does not sing because it has an answer. It sings because it has a song. – Iran
title: “Release”

Audience Choice: Team Rainbow, Will Saxton / Kevin Collins
proverb: Be aware that the halo has to fall only a few inches to be a noose – New Zealand
title: “Let’s Go…To Church”

*Producer’s Head of Class (Student) Award: Pecos Bill and the Wranglers, Jack Noble
proverb: When the well is dry we know the worth of oil. – Traditional
title: White Flags

*Producer’s Avant-Garde Award: Team Rainbow, Will Saxton / Kevin Collins
proverb: Be aware that the halo has to fall only a few inches to be a noose – New Zealand
title: “Let’s Go…To Church”

Honorable Mention – Grassland Spirits, Brent Velasco
proverb: The important thing is this: To be able at any moment to sacrifice what we are for what we could become. – Belgium
title: “Agoraphobia”

*Note: The Producer’s awards were handed out from the producer’s (Jason, Clark, and Salyer) of the festival and not decided upon by the panel of judges.

“Welcome to the Ring” short film by Salyer.
“Lance and Javier” short film starring Kerline, Jason Streff, Clark Kline and people “In the Street”. Directed by Joey McAdams, Edited by Clark and Joey.

PRODUCER NOTES:  From 15 teams to 32, the Fest more than doubled in teams after the first year (with many of the first time 72 filmmakers being first time filmmakers as well).  It was a big surprise, our biggest one year increase in teams, with most of the teams signing up at the Launch Party, causing a bit of a mad scramble behind the scenes.  The proverbs made for some interesting and moving films: mostly narrative but a few experimental.

The Fest came together with only a few minutes to spare.  All 32 films needed to be imported/watched/judged then encoded, and burnt onto two DVDs between Sunday Night turn in and Saturday Night Fest which proved to be extremely difficult with an outdated computer.

Salyer McLaughlin opened the Fest with “Welcome to the Ring” made from super 8 camera footage that captured teams behind the scenes of launch, filming and turn in. Joey McAdams premiered his first 72 related interstitials that would become a staple in future years.  Jason, Clark, Joey and the inimitable Kerline produced the polarizing “LANCE AND JAVIER”, a 24 minute short shot during the same 72 hour weekend that the teams were shooting their films.  Having competed in 72 Hour contests in the past, the 72 producers wanted to poke a little fun at the process. The insufferable director, his/her insatiable desire to make art, the casting, shooting and ultimate second guessing of final product… 72 even threw in the pains of the export process which was considerably more frustrating back in the days of printing to tape.  We included a “Can I turn in My Computer” gag, which funnily enough a team tried to do just a few hours after we shot that scene.  Kerline was always a blast to work with, and she made cameo appearances throughout the early years of the Fest (including a Lance Stoneworthy One Year Later in 2008).

The combination of 32 short films, the 24 minute “Lance and Javier”, interstitials, 30 minute intermission, and award ceremony made for an extremely long night. The night was hosted by Rona Mensah.

Due to the length of the night, and the request of multiple patrons, the Fest grew to two nights in 2008 (Every entry premieres on one night, and Finalists/Awards/Sketches on the next).